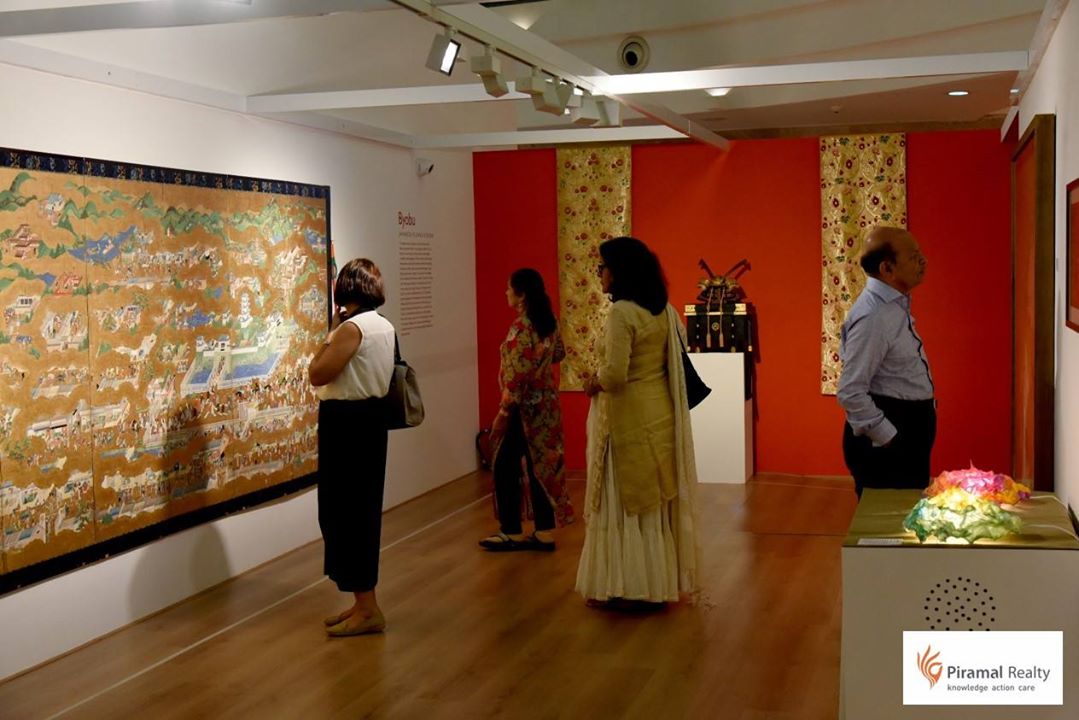 Artworks from the exhibition Discovering Japanese Art in Piramal Museum of Art in Mumbai in India. There are two Light Sculptures by me a pink one and yellow one.

Two Light Sculptures on the Japanese Exhibition in Piramal Museum of Art in Mumbai in India 2016.

"Discovering Japanese Art - Exhibition
PIRAMAL REALTY·3. NÓVEMBER 2016
When and Where: November 2016 at Piramal Museum of Art, Peninsula Corporate Park.
Inspired by the rich artistic legacy of Japan, “Discovering Japanese Art” showcases a humble but wide display of Japanese arts and craft ranging from the Edo period (c. 1615-1868) to the present. These include Edo period screens and woodblock prints, designer Kimonos, elegant traditional furniture, and wabi-sabi ceramics, all from the Piramal Art Collection.
Byōbu : The Japanese revered beauty in various forms and thus added an aesthetic touch to every aspect of their life. This attitude is most obvious in the painted screens of Japan, a tradition that originated in China. Known as Byōbu, these folding screens were used to block wind from entering the house as well as to create discrete private spaces. The screens were a staple in the houses of the wealthy, who commissioned famous artists of the time to create them. Featuring narratives from popular tales of the time or any subject that caught the fancy of the patron, most often the screens made a liberal use of gold. This added a sense of opulence to the residence and more importantly, reflected light into the dark interiors of the living space. During the Edo period, when there was a thirst for items of luxury, painted screens attained new artistic heights. Edo period screens, such as the ones displayed at the exhibition, reveal a fine sense of design and an intuitive understanding of composition wherein the narrative gradually unfolds both space and time.
Kimono : The Kimono, a robe traditionally worn by both men and women, is more than just a piece of clothing for the Japanese. It is a garment that conveys the wearer’s social status, personal identity and political affiliation to the larger society. Originating in the Heian period in the 8th century, Kimonos soon became part of a codified system of social etiquette wherein colour, cut and style indicated the nature of the event for which it was worn and the connection between the wearer and the event. Kimonos also reflected the socio-political state of the kingdom, taking on austere tones during the martial Kamakura period and favouring opulence during the Edo period. A great deal of expertise in dyeing, brocading and layering colours goes into the making of a Kimono. Hence the Kimono is a wearable work of art, immortalised in numerous paintings and literary works of Japan. However, today, the Kimono is mostly worn only during ceremonial occasions.
Tansu : The Japanese had a highly evolved tradition of cabinet making that originated in the Edo period. Known as Tansu, these cabinets were conceived as mobile pieces of furniture that could be used to store clothing, personal items as well as business related materials. Invariably, cabinets intended for domestic use would be stored in storehouses adjacent to the main house and accessed whenever necessary while those in business establishments would be kept on raised platforms. Fashioned out of elm, chestnut or cypress wood, all of which were available in the forests of Japan, the cabinets were either made with a lacquered finish or a dry finish, in which case clay or chalk powder would be rubbed into the wood surface. On display are wedding chests that were normally used by brides to bring personal belongings to her marital home. While some of the bridal chests were painted with images resonant with the occasion, the chests displayed here are elegant and stately in their simplicity.
Japanese Tea Ceremony : The Japanese Tea Ceremony became popular among the military and wealthy urban classes during the sixteenth century, and by the 1580s participation was a standard requirement of social acceptance. This ceremony developed as a "transformative practice", and began to evolve its own aesthetic, in particular principles of "sabi" and "wabi" where the latter represents the inner, or spiritual, experiences of human lives, whereas “sabi” represents the material aspects. Characteristics of the wabi-sabi aesthetic include asymmetry, roughness, simplicity, economy, austerity, modesty, intimacy, and appreciation of the ingenuous integrity of natural objects and processes. This philosophy of “the wisdom and beauty of imperfection” is seen through the ceramics displayed and the aesthetic of the show."